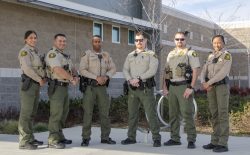 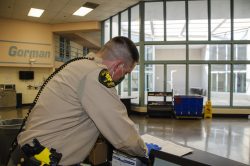 Various services are required to maintain and adequately staff the Detention Division, one of the largest divisions in the Sheriff’s Office.

The Court Security Section works under the authority of the Yolo County Sheriff’s Office Detention Division. Court Security is based at the Court Holding Facility. Sheriff Deputies secure inmates in holding rooms while they are waiting to appear in court, after their court appearance, and while they await return to the Detention Center.

This section works with the Transportation Deputies and is staffed with a Lieutenant, a Sergeant and 16 deputy sheriffs, which are funded by the courts. This section is tasked with providing security for the court, judges, courthouse staff and the public. Over 269,000 people enter the main courthouse annually serviced by an additional three satellite courts: Department Nine Superior Court, Family Court, and Traffic Court .

The Records Section is operated under the authority of the Sheriff’s Office Detention Division. It is located at the Monroe Detention Center in Woodland, California. Personnel support the Detention Facility, Patrol, Transportation, Court Security, Detectives, Sheriff’s Work Inmate Program, Civil, Boats, and Coroner Sections. Since this division is a 24 hour operation, personnel also work with Yolo County city law enforcement and other outside agencies.

All incoming calls for the Monroe Detention Facility are received by this section. Records personnel also handle the administrative telephone lines after business hours, and on weekends and holidays.

Victim Information and Notification Everyday (VINE) – The California VINE system is a service through which victims of crime can use the telephone or Internet to search for information regarding the custody status of their offender and to register to receive telephone and e-mail notification when the offender’s custody status changes. The VINE toll-free number for the California VINE system is 1-877-411-5588. California State VINE is a service of the California State Sheriffs’ Association and is provided by your local sheriff.

The Sheriff’s Transportation Section uses a state-of-the art Braun-Northwest, 34 passenger inmate transport vehicle to transport an average of 40-70 inmates per day between the Detention Center and Court House for their appearance before the court.

The bus is also used to transport inmates between the Deuel Vocational Institute (DVI) in Tracy and the Yolo County Sheriff’s Detention Center. This section is heavily involved in the T.O.P.I.C. (Transportation of Prisoners in Cooperation) program with other law enforcement agencies. The program saves valuable monetary and personnel resources.